All posts in this category

Just a quick post announcing my entry this evening into the Ten Pin Bowling 7-10 Split Hall of Fame.

Bowling geeks will be interested to know it happened at MFA Bowl in Burnley (AMF lanes), and the shot was a straight ball from middle arrow to around 1/2″ left of centre on the 7 pin, which struck the back curtain head-on to rebound and take out the 10 pin.

Feeling so chuffed with myself I might just make myself a bowling trophy in the morning to celebrate.

The last couple of nights I have been over at the allotment, strimming down weeds and tidying up.

Yesterday, after an hour and a half’s work I was interrupted by my phone ringing, and a panicked voice saying they were returning my call, and was everything OK as I had made lots of calls. Somewhat puzzled, I assured the caller I was fine. Upon ending the call, I noticed my phone’s wallpaper had changed, also that around 50 different apps were open.

Well, I’d never have guessed it, but it turns out that using a petrol powered strimmer with your phone in your pocket isn’t a good thing, as the vibrations have a wonderful knack of making your phone think someone is pressing buttons. Oh well, no harm done!

I awoke to an unusual email from eBay containing an invoice for my purchase. What purchase? I was digging and weeding last night. Oh, poo! 💩 My phone had only gone and bought an item for £126.00 plus £10 delivery. The strangest phone call of my life was about to be made. I honestly don’t know whether the seller believed me, I would have found it hard to believe myself, but ultimately he was very understanding, and cancelled the sale.

So, my phone now has a weird and wonderful password on the lock screen and my fingers are crossed for no further surprises.

Eating cat food off the floor

Just sat here wondering why Gene thinks his food tastes better when he drags it out of his bowl and eats it off the floor.

In the interests of science (i.e. if anyone is prepared to pay me) I am willing to undertake an experiment to see if the same holds true for humans and human food.

PHOEBE: This monitors everyone playing the game. There — player four. It’s his telemetry.

SCULLY: What do you mean?

BYERS: On the monitor.

FROHIKE: Those are his vitals.

LANGLY: He’s still in the game.

SCULLY: Yes, but where’s the game?

(In the game, MULDER comes to on the ground. He is alone. He throws off his broken headset, gets up, looks at the sword embedded in the wall next to him, then goes out into the main area, gun at the ready.)

(MAITREYA appears at the end of the street. She begins back-flipping toward him à la Blade Runner. At the last minute, MULDER fires at her. She flips over him and disappears. MULDER looks around.)

(In the control room, the GUNMEN are working on the computer. PHOEBE approaches them nervously.)

LANGLY: I think that’s it.

PHOEBE: What are you doing?

LANGLY: Making a kill switch so we can shut down the game.

(The Maden household, Paul and Sam are sitting at the dining table watching TV. Eagle-eyed as always, Paul spots something that causes him to become alarmed.)

PAUL: No you’re not! You’re pricking about with the power cable on a hard disk!

Sam: “Ooh, these new Pyjamas have got long sleeves!”

Me: “Yeah, they will do if they’ve got long sleeved pants.”

Why am I falling apart?

Hello, my name is Paul and I get earworms. You know, songs that stick in your head.

Not just any old earworm, but songs I really have no business liking, or even listening to. Take this one for example…

Yesterday, I awoke back in December 1984, suffering the wailings of Elaine Paige & Barbara Dickson’s duet ‘I Know Him So Well‘.

Now those among you who also suffer from earworms will know this, but the problem is that you don’t hear the whole song going round in your head, but just a small part, maybe a few seconds, on a permanent loop. In this case, just the line “Why am I falling apart?”.

As you know, the best way to get rid of an earworm is to replace it with another, usually I try Duran Duran’s ‘The Reflex’. Coincidentally another song from 1984, hmm, was there something in the water?
Sadly this one was just too pervasive and I couldn’t shake it for a whole three hours. Congratulations 1980’s peoples, your songs are dated but irritatingly catchy.

Alas, my Chess musical nightmare continues. This morning I awoke once again to the same song, with the single word “Security” going round and round and round. How on earth to rid myself of this? Hmm, think fast. I know, in Star Trek, Captain Picard shouts “Security” a lot, think of Worf. Nope, that didn’t work, because now they are the ones singing the line. Damn, damn! Oh, when will this nightmare end!

Iron Maiden are an English heavy metal band from Leyton in the East End of London. The band were formed in 1975 by bassist Steve Harris, formerly a member of Gypsy’s Kiss and Smiler. Iron Maiden are one of the most successful and influential bands in the heavy metal genre, having sold over 80 million albums worldwide without significant mainstream or radio support.

Any similarities between the two are purely coincidental.

Just made an important discovery about Imperial Leather soap.

It is with great pleasure that I, Paul Maden, hereby announce a way to make Imperial Leather soap last twice as long…

Yep, that’s all there is to it. Keep the foil label face down in the soap dish, and in time as the bar begins to wear the label will act as a stilt and protect the bar from turning to mush.

Woohoo, got a letter in the post today related to my top tip on soap longevity.

The note read “Looking on your website, it would appear your theory does work. Well Done! P.S. Thanks for the advice. Anon.”, and was accompanied by a well-used bar of Imperial Leather soap, label intact.

Sadly the sender failed to pay sufficient postage, and I had find another 6p plus £1.00 “handling fee” before getting my hands on the evidence. Maybe you should have used the soap for another week before posting it to me! 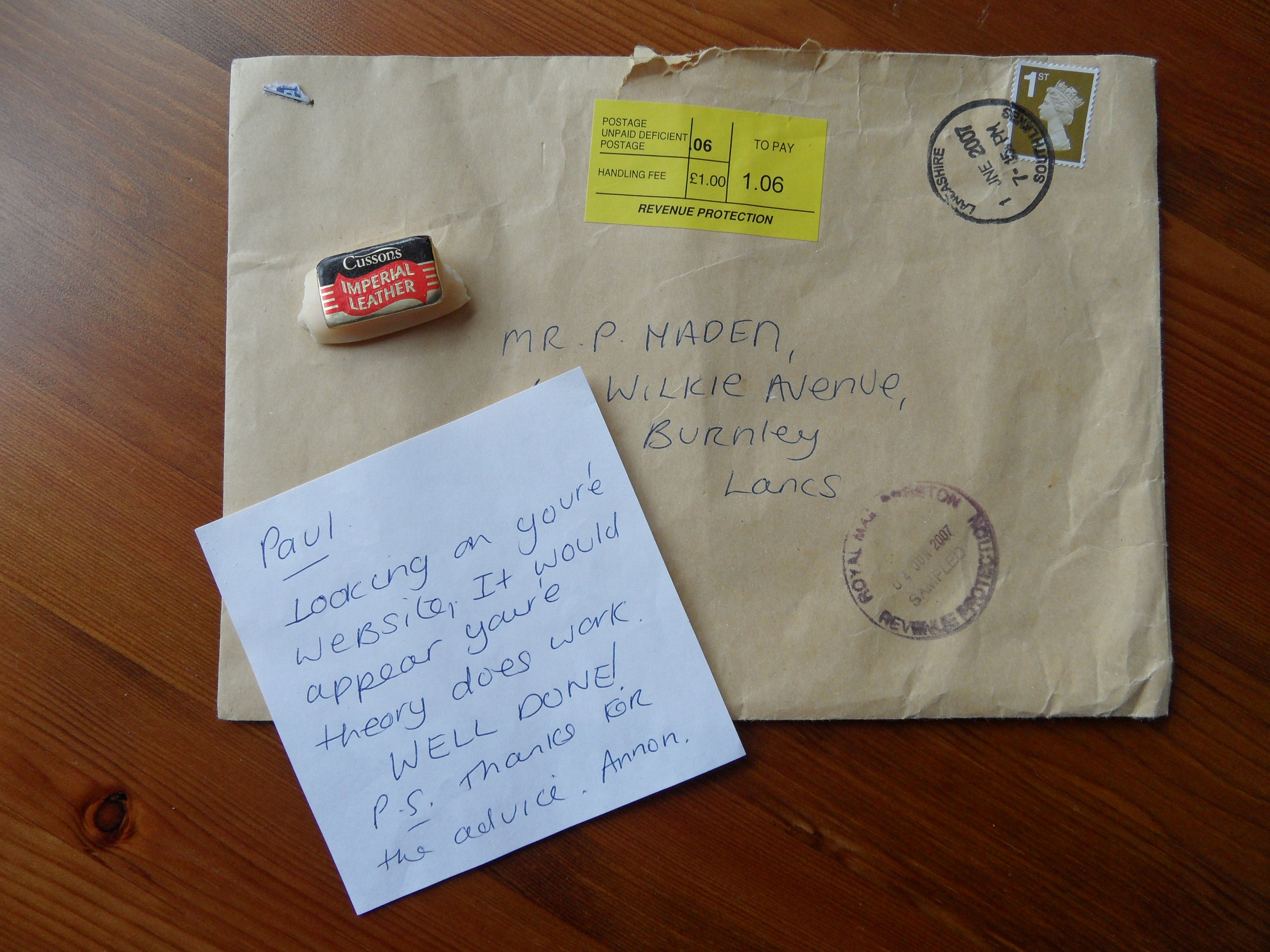 On this site I’ll be reporting on new sites and content I’ve created, for both work and pleasure.

Additionally I’ll bore you with long-winded stories about bowling, and my regular dvd marathons.

None of this is required reading, but it may assist you when the time comes.